After a break of two years due to the pandemic, we were so thrilled to see the return of our wonderful House Drama. The competition originated at Pate's Grammar School for Girls in the 1930's. It seems a very long time ago that House Drama 2022 was launched back in April with the drawing of the book titles out of a hat by the new Year 12 House Officials. It was a huge challenge to work through five days of rehearsals and five performances over Activities Fortnight in early July and get to the judging and crowning of the House Drama Overall Winner late in the evening of the penultimate day of the Summer Term! With hopefully no blood, there would have been much sweat and probably some tears to make everything come together for launch day and thanks needs to be given to the many, many students in the productions and also the members of staff who got involved in the rehearsals and volunteered to look after students in between performances. House Drama would not be possible without the whole school community pulling together to produce an experience which is treasured in the memories like this one.

We are in awe of our Sixth Formers - the House Officials and their friends - who wrote scripts, choreographed, rehearsed, built and painted sets and costumes, who led by example and in keeping with tradition, had very little staff input. They cheered their Houses along, boosted morale and played games when they were flagging in the heat, and have shown outstanding enthusiasm, kindness and compassion, to bring out the best in every student. It's absolutely worth all the hard work for the confidence, friendships and wonderful camaraderie that comes from it.

This year’s House Drama competition was possibly the hardest fought we have ever seen. Every House gave their all and we had five incredible performances to audiences of almost 2,000 people over the two days! The livestream of the final performance and adjudication was watched by hundreds of people, allowing those who couldn't get there the opportunity to be part of the action.

The competition saw the five houses take on the children's tales of Treasure Island (Beaufort), Alice in Wonderland (Richmond), The Lion, the Witch and the Wardrobe (Pembroke), The Jungle Book (York) and The Wizard of Oz (Gloucester). It was a real pleasure to have Judi Walton, LAMDA teacher and freelance coach and consultant in Drama and Life Skills, assume the judging mantle after the final performance. The camaraderie and team spirit was clear to see amongst the houses, as in an absolutely electric atmosphere, the category winners were announced. Judi was full of praise for the quality of the productions and the talents of the students, especially those of the Musical Directors. She had a particularly tough job picking the Overall Winner 2022 from the inventive interpretations of the originals and it went to .... Pembroke! Well done Pembroke for putting on a stunning performance!

The programme covers and awards: 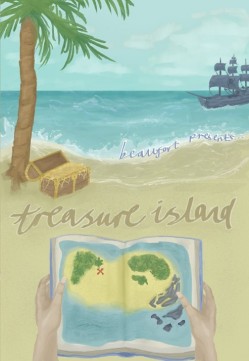 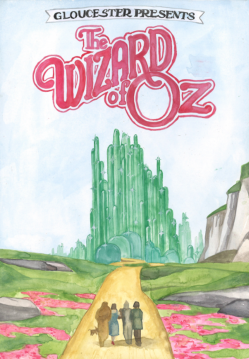 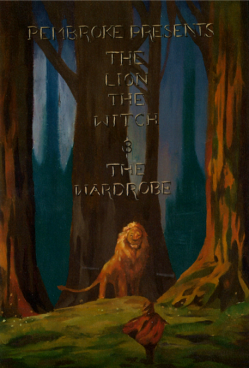 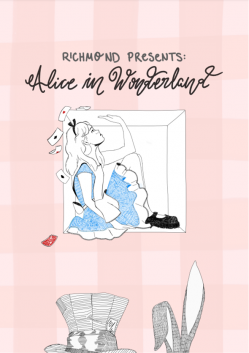 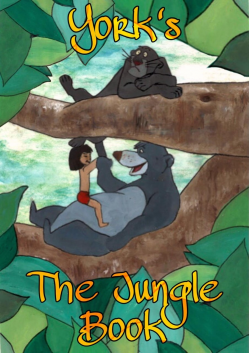 It did get us thinking about the development of House Drama at each of the three schools. Details are a little hazy for CGS; whilst school plays were in evidence for many years it's not until 1969 that we see a mention of the 'House Play Competition', which was won by Corfield with 'Death and a Tree'. PGSG fares better with the July 1936 edition of the school magazine reporting 'The School is particularly grateful to Mrs Halliday for coming to judge the House Plays, and her criticisms afterwards'. One of our most beautiful treasures in the school Archives is the wooden statuette 'Thalia', the goddess of comedy and idylllic poetry. Deputy Mayor, Alderman Clara Winterbotham, commissioned Cotswold sculptor William Simmonds to make her in 1948 as a House Drama trophy for PGSG. The first winners were the Normans for their winning production 'Riders to the Sea' and she was presented to House Captain (and Head Girl) Audrey Brandon. 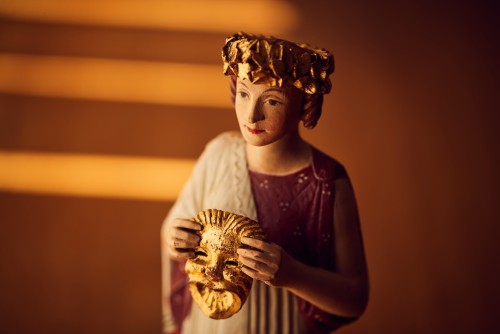 PGS looks to have its first House Drama mention in the 2012 edition of Pate's Progress with the then four houses taking on 'Chitty Chitty Bang Bang', 'The Wizard of Oz', 'Jacob' and 'Annie' but our alumni tell us that the competition did take place before this (we just haven't yet found it documented). There was a Lower School House Drama competition in 1987 which was adjudicated by Sheila Mander (who founded the Everyman Youth Theatre) and the winning entry for that year was Gloucester's  'I was a teenage Jekyll and Hyde'. Other productions named by alumni are 'Grease' for Beaufort in 1993/1994, 'Matilda' and 'Peter Pan' for Richmond between 1995-1998. We will endeavour to find out more information about PGS drama activities and update this article. Year 9 History students recently put together a thought-provoking exhibition to explore the question 'How and why did th… More... Little Amal came to Cheltenham in June - it was an amazing event which happened to have a brilliant Pate's alumni connec… More... It has been wonderful to see our student artwork in print in the Hazlewoods business magazine. More... From thousands of entries, five of our young artists have had their work selected for this year's Young Artist's Summer … More...