In celebration of Gilbert Jessop

It was a great surprise and exciting to see the media spotlight shone on a 1902 cricket record set by Patesian Gilbert Jessop. Gilbert Jessop - known as 'The Croucher'

So close but Gilbert Jessop's cricket record still stands! On Tuesday 14th June 2022, Jonny Bairstow batted England to victory against New Zealand at Trent Bridge and made the second-fastest century by an England batsman in Test cricket, from only 77 balls. He was just short of breaking the England century record of 76 balls that has stood for almost 120 years - set by Cheltenham Grammar School alumnus Gilbert Jessop, against Australia at The Oval in August 1902.

Gilbert Laird Jessop (1874-1955) was born in Cheltenham and attended Cheltenham Grammar School (CGS) from the age of 11. His father, a Cheltenham surgeon, was also a Governor of the Pate's Foundation. Jessop's outstanding qualities as an all-round sportsman were quickly recognised and he played for the school's First Xl cricket team in 1886 when he was just thirteen, in the position of long-stop. Sadly, when he was 15 his father died and he was obliged to leave CGS after only four years (1885-1889), taking up as an apprentice school master at Alvechurch Grammar School and then at Burford Grammar School as a teacher.

He went up to Cambridge in 1894 and became Captain of Cambridge University Cricket Club in 1899. In the same year he played for England and in 1900 succeeded Dr W.G. Grace as Captain of Gloucestershire (he had made his first appearance for Gloucestershire in 1894). He remained Captain until 1913 and played in eighteen Test matches with his excellent wicket-keeping skills and aggressive batting style making him a formidable opponent. He was nicknamed “The Croucher” because of his unusual hunched batting stance at the crease, disconcerting his opponents when he suddenly sprang up as the ball was delivered! At 5ft 7 in and 11 stone, he was a suprising powerhouse! 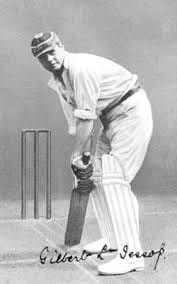 Over the years, there were several features on Jessop written in the CGS magazine, The Patesian. The April 1903 edition comments on his 1902 Oval achievement: "We offer our congratulations, though late, to G.L.Jessop on his marriage in December last. The winning of a Test Match and a bride in the same year is surely a unique performance."

An article in the 1971 Patesian concerning the house eponyms (the names of the six houses in the school chosen by Headmaster R R Dobson in 1922 (headmaster 1919-1937), states: 'When he retired, Jessop had scored 26,058 runs in first-class cricket for an average of 32.6" (and taken 873 wickets). In 1914, though over military age, he volunteered for service and was finally invalided out in 1918. He was interested in other sports and would have appeared for the University of Cambridge in a billiards match, had he not been gated for failing to attend the requisite number of Chapel Services". He was also a talented football player and was a member of the Cheltenham Town Football Club.

Charles Burgess Fry, sportsman (cricket, long jump and football) and author, is quoted as saying of Jessop: "No man has ever driven the cricket ball so hard, so high and so often in so many different directions.No man has ever made cricket so dramatic and entertaining". We salute your achievements Gilbert Jessop! The Archives has moved to the main school building and we are looking forward to displaying treasures from our illustrious school history to students and visitors. More... Did you know that when Richard Pate founded his Schola Grammatica in 1574 he also founded an almshouse to provide accomm… More...